Jaina Mishra is based in Singapore and Goa. Her fascination with the world of antiques and ethnic textile crafts that began as a hobby over two decades ago, has now grown into a serious pursuit of insight into these worlds. This pursuit has resulted in real life interactions with endangered cultures through her travels, and in a collection of antique and ethnic articles representing these ethnicities. In the past few years she has begun to focus on Indian & Asian textiles and her collection is available online at http://www.wovensouls.com

India, a country that has been geographically divided into 26 states, for administrative ease. The dividing lines of these states, have been drawn roughly based on language and ethno-cultural groups. These groups have inter group differences and intra group similarities in food habits, music, folk traditions, festivals, life customs and most importantly from a textile collector’s point of view, textile traditions.

I use the word textile tradition to encompass every aspect of textile – what is worn, how it is worn, how it is wove and embellished, which sections of the textile garment are embellished, the loom technology, the base fabric & dyes used, the occasions for which these are used, and every other detail that contributes to creating the unique textile identity of a particular ethnic group. 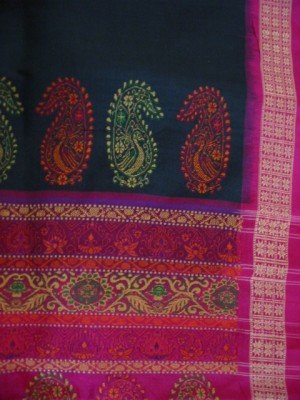 While at a macro level, everyone understands India as a land of 26 states, and 24 different language groups, anyone familiar with India knows that there are infinite subcultures within each culture. The splitting into further subcultures can continue to a point where no single average person can hope to understand every single ethnic identity within India. So, for example, within the state of Gujarat, Vaaniyas are one of the four classes. But Vaaniyas could be segmented into Morvi Vaaniyas or Modh Vaaniyaas or …. and so on. Within each of these sub sects of Vaaniyas we have further subdivisions! The population of some of these sub-sub-segments could easily fill up a whole town such as Pittsburgh ( Population in the range of 330,000 – 340,000 ) while others would barely fill up a dozen flight loads of the A380.

Each of these sub-sub-sections, vary from each other in tiny manifolds – so as we move from one group to another, the nuances of lifestyle are not as obvious as they would be, if we were to move directly from an Eastern Indian state to a Western Indian state. These core differences between adjacent sub-groups usually arise from religious roots. And in India, religion is not restricted to just temples and worship, it pervades every part of day to day living. A minor change in deity, therefore, from one sub-group to the next, could mean different rituals for important life events such as birth marriage ad death. Textiles, jewelry, home decor, and all material aspects of life, associated with these life events, naturally, also get impacted by the shift. 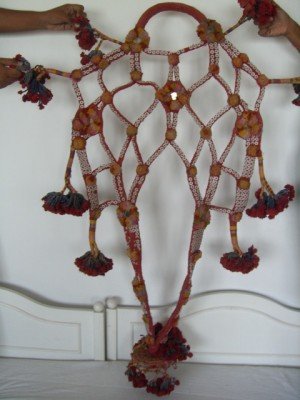 We see that in India, the spectrum of variances in textile traditions, is much larger than one would expect of any similarly sized geographical or population expanse.

The first reason for this variety, we have seen, is that textile traditions are mere material manifestations of the large spectrum of separate ethnic sub-sub-groups.

Secondly, the population of sub-segments have had a few thousand years to unfold and develop their intrinsic identities, which means that the deviations in textile traditions have had sufficient time to bloom.

Thirdly, over the centuries, several migrations of partial hamlets of ethnic sub-sub-groups have occurred. Though they carried with them their skills to a totally new geographical area, original resources for their craft may not have always been available and substitution may have been forced. Further, local tastes and patronage may have forced adaptation or mutations giving birth to new variants of the old tradition.

The resultant landscape of Indian textiles is therefore extremely varied and complex and presents an interesting matrix to study.

My armchair research estimate of all surviving textile traditions in India, stands at a minimum of 225. This includes weaving techniques, embellishment techniques, coloring techniques (includes hand-painting, batik, resist dyeing) and a few textile forms that are uniquely associated with a particular region or ethnic group.

Some of these are old pieces, but all of the 30 articles, are good examples of the textile tradition to which it belongs. Each is the tip of the iceberg of that particular textile craft and the set of 30 here just about provides a glimpse of the variety that’s waiting to be understood.I am compiling a matrix of ethnic groups vs textile traditions on paper. But such an exercise will be complete only through fieldwork of the entire length and breadth of the country ! An impossible task perhaps ?!