Textiles, costumes & dress codes have played an integral role as announcers of significant life events, in some cultures more than in others.

As I began my travel in Northern Thailand among the hill tribes, I gradually became aware of the predominant use of textiles to communicate sentiments and messages wordlessly.

This mini-article is an account of my exploratory journey in which I am sharing my fascination for the symbolism contained in these textiles.

1. The Dress Code of the Unmarried

In the White Karen tribe, the white tunic announces that the young girl is unmarried.  The dress is made from homespun cotton and is simple in design. Some groups decorate it with red weaving and tufting. 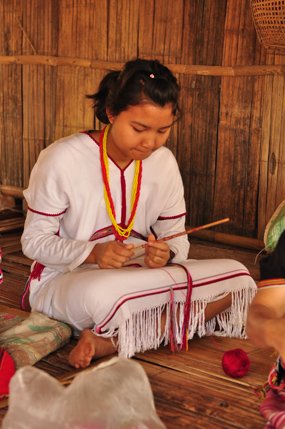 The variation used at ceremonies has a fringe of thick red strands of cotton emerging from the yoke. 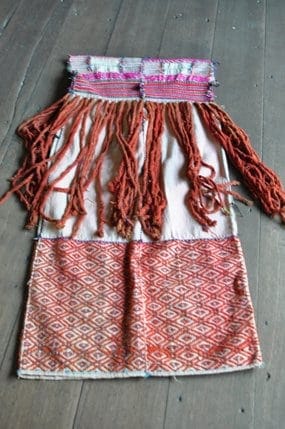 In many Asian cultures there is a dress code that announces the marriage of a woman, but this is the first time that I have come across the announcement of being unmarried.

In Asia, the variety of adornments that announce that a woman is married is astounding!   A pair of 2 kg ankle weights in some tribes in Bundelkhand India, tattoos all over the hands and on the face of the Rabaris in Kutch, India, and ornate silver jewelry weighing up to 300 grams to plait the hair around the face among the Lambani gypsies of India are among the more interesting announcers of marriage.

The Polong tribal marriage belt is equally interesting. It is simple in form, but is unique in the fact that the symbol of marriage is worn on the waist. Maybe this has some linkage to the symbolic dedication (and bondage) of the womb to the husband’s family in marriage ceremony of other Asian cultures. 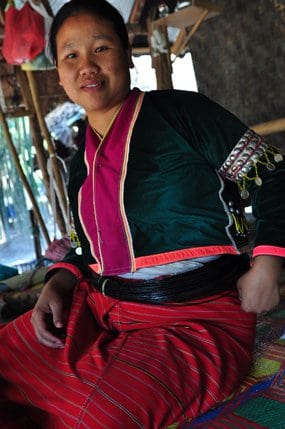 This belt is a stiff set of rings that are cotton ropes coated with black lacquer.

The Blue Hmong Tribe usually wear batik indigo pleated skirts that are made of hemp and embroidered with cross-stitch.

During her lifetime, the woman makes a special burial costume for herself and her husband. These clothes are never worn, and kept aside ready for the final ritual. This costume is grander and more ornately embroidered than the regular dress and has highly decorated sleeves, chest pieces and back collars.  These costumes are probably the finest craft produced in their lifetime, but considering their use, these are not available for trade.

The Yao Mien tribe practice Shamanism – a ritualistic spiritual faith. A Shaman is believed to have supernatural powers and a connection with spirits and the world beyond. He is called in to heal the sick and in times of adversity, to drive away evil spirits.  He does this by performing rituals at the family’s ancestral altar for which he has a dress code – complete with robes, scarves and a set of masks. 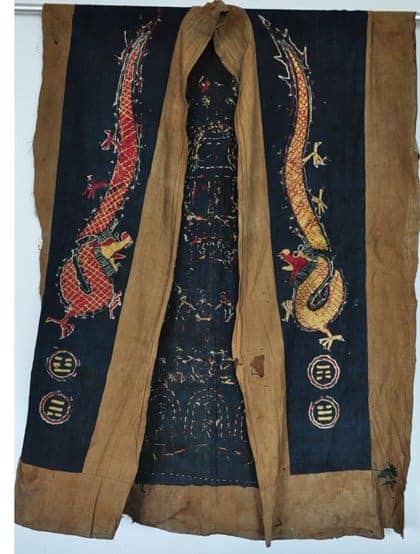 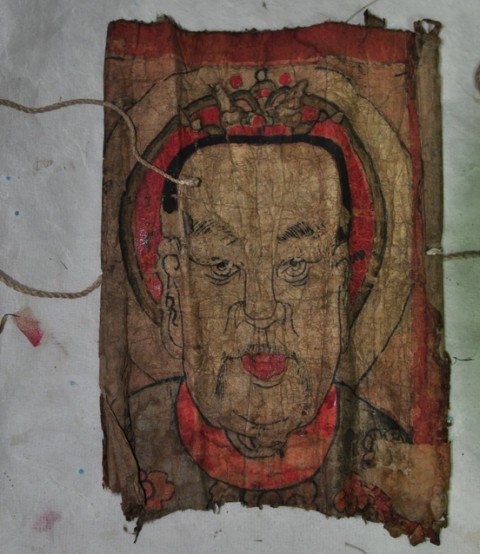 The Pwo tribe weaves red blankets with white pinstripes that have fringes across the entire length, for ceremonial use. The ends are decorated with buttons and bells and sometimes with shiny wings of green beetles. These shawls are used mainly during the singing rituals at ceremonies. 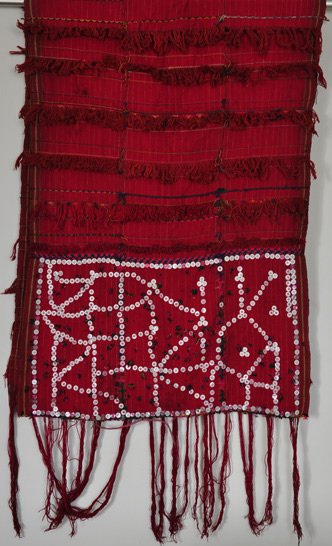 6. An ornament of protest?

Much has been written about the long neck Karen tribe.  There are several legends associated with their wearing the neck ornaments.

In one story the metal bar is coiled around the neck to protect the woman from tigers when the men of the house go out hunting and are unavailable to protect her. In another tale, an exiled princess from a kingdom in Burma, vowed to wear a scarf around her neck until she got her annexed kingdom back. When the scarf wore out, she wore a substitute made out of tree bark, and eventually a ring of metal replaced the tree bark.  Following the princess, all the girls of the tribe wear that mark of protest even today. 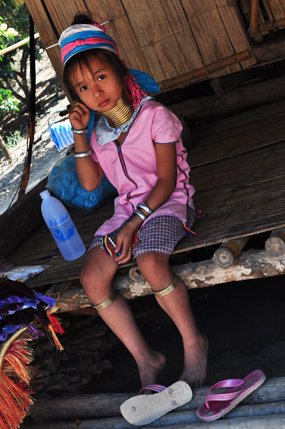 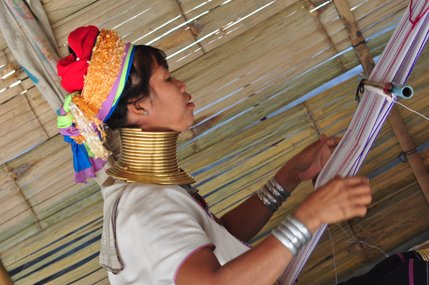 Some unusual traditional zigzag weaving created on a back strap loom: 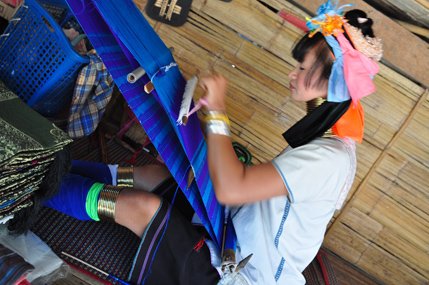 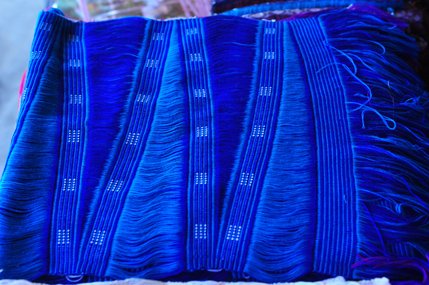 These were some of the textiles that I had the opportunity to understand, and they represent a very tiny fraction of the textile wealth created by these tribes.

The significance that textile articles hold in the lives of tribes is far more than that in the lives of settled and urbanized ethnic groups. Therefore these journeys of tribal discovery are extremely rewarding.

Given the fact that there are more tribes in South Asia alone (over 500) than there are countries in the world (195), it seems that the journey just begun, will not be completed in my lifetime!  The song from The Lion King  “There’s more to be seen than can ever be seen, more to do than can ever be done” captures my wistful sentiment about this journey perfectly…

Based on interviews with tribe members and local villagers, through interpreters, and readings.