It is fairly common to see textiles or garments created specially for important life events across all cultures and ethnicities. The most well known of these are pattern codes and color codes for weddings and mournings.

All cultures have traditional materials associated uniquely with the various joys and tragedies of life. We all collaborate with other members of our society to consume enhanced manifestations of various art forms – music, cuisine, textile, jewelry, decorative art etc, to celebrate or mourn life events.

In several cultures, specific art manifestations rise from the level of being peripheral participants in a celebration – to become the core expression on which the celebration rides. Turkey dinners for thanksgiving in the US and mooncakes for the mid-autumn festival in China are culinary examples of these.

It is only recently that I discovered a culture that has a range of textiles, each uniquely created to celebrate a specific life event or festival. This tradition is an unusual, if not unique custom, of the Adivasi tribe from Koraput, Orissa, India.

Over the years of interacting with a Koraput weaving family, through serendipitous exposure to their articles, I began to notice a pattern of anomalous articles – a pattern that I did not see with any of the other weavers in India. It was not obvious to me at first as these special articles were interspersed with the majority of commercially produced pieces that defined the statistical mode. And, the weaver himself, having lived with these traditions, was probably too immunised to the differentiated qualities of these few anomalous articles, to highlight their uniqueness to me.

And so, it was only sometime last year that I began becoming aware of these anomalous pieces and questioning him. Extracting these answers unfurled an amazing array of traditions that could easily qualify as markers of this tribe – traditions that mark the passage of life and the passage of seasons, through textile expressions.

The Koraput Tribals – live in Kodpat district in Orissa India – one of the poorest states in the country. Originally a tribe of only 15-16 families that lived in the jungle, they now have grown to 60 households, of which only 20-22 practice their weaving as a mode of earning a living. They still live a relatively simple life ( even though they carry cellphones !) and hunt and farm and live on less than US$300 a month for a family of 4. (This, of course has no bearing on the amount of beauty in their lives – either produced or consumed !).

The celebrations relate to either life events such as marriage and birth, or to seasonal events that impact their interactions with the earth. Below I present the unique textile articles associated with the celebrations.

The Dus Gajee Bridal Sari
‘Dus Gajee’ translates to ten hands. Yards or ‘hands’ is the metric used to measure the dimensions of fabric. The custom associated with this textile, generates fun and good cheer between the families of the bride and the groom. (Marriages in India – create deep connections not just between two individuals but between two families and clans). The custom is that the grooms family gifts a Dus Gajee sari to the bride with the assurance that it is indeed ten yards long. This assurance becomes the crux of traditional custom. The bride’s family now, measures it for accuracy. If the sari is longer or shorter – demands of compensatory fines ensue. And the groom’s family must pay the fine. Negotiations for the fine are conducted in good cheer and in the worst case the groom’s family pays for an additional feast ! 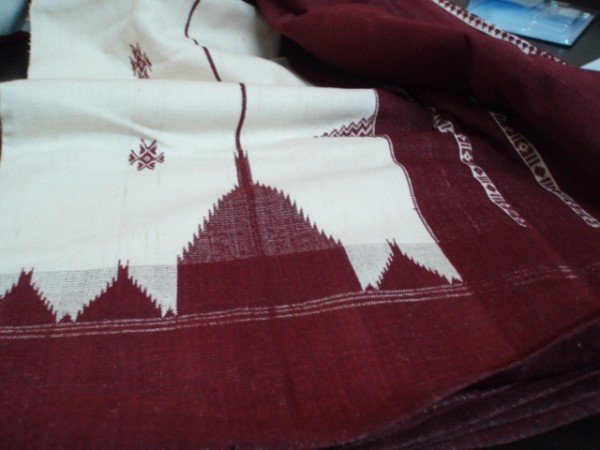 The Baccha-ka Tuval
The imminent birth of a baby invokes another textile ritual – that of weaving a Solaah haath (16 hands) Sari. This textile has a Palloo (decorated end that stands out in contrast compared to the field of the sari) on one side, small motifs across the field at intervals of 4 hands but unusually, no border.

This extremely long weaving, at the time of birth, is split into two weavings – one that is twelve hands long for the mother and one that is 4 yards long for the baby. The baby’s textile is first used at the naming ceremony, in which the four corners are held by four people to create a hammock-like swing in which the baby is placed. Amidst singing and swinging, the baby is given its name.

The Aath Haath Naach Sari & the Hunting Shawl
The full moon of the Paush lunar month – sometime in January – marks the start of the Hunting season and is associated with the weaving of unique dance saris and hunting shawls.

On the full moon night the festivities begin, expressed in the form of food, music and dance. For the dance women wear a ‘pant-ki-dhoti’ – an Aath Haath (8 hands long) sari in which the draping of the lower half resembles the draping of man’s ‘dhoti’ (example below) and reaches the knees.

This sari has the unique format of a ‘palloo’ on both ends – so that when it is draped as pants, the panel that forms the pleats between the legs is decorated. Each palloo is woven in different designs ! 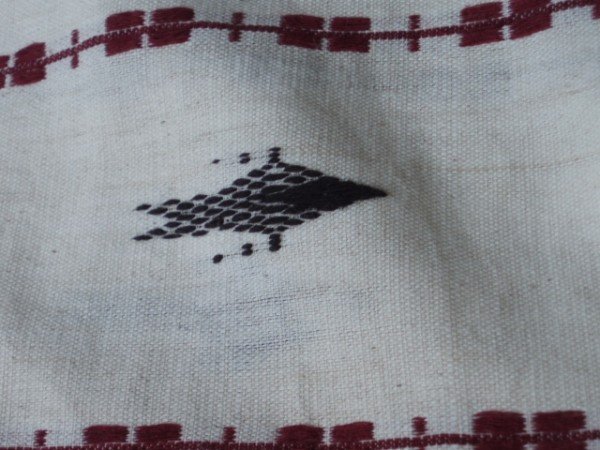 The next morning, the hunting troop sets out for the jungle. Women accompany the men up to the edge of the jungle. Before they set out, the men are presented with symbol of good omen – the coconut, and of course a textile – the Hunting Shawl! This shawl is embellished with motifs of fish, peacocks, crabs and other creatures.

The Dhaan Navaa Khaaee Sari
Literally translated this means ‘the eating of new grain’ sari. This textile is specially created for the Harvest festival celebrating the rice crop and takes place around September.

The Jagannath Rath Yatra Bandee-dhoti
The Jagannath Yatra is celebrated all over Orissa. Village fairs are held across the state to reflect the yatra at Puri. For this celebration the ‘Bandee Dhoti’ is woven for women, which is uniquely adorned with a small border with ‘crocodile teeth’ motifs.

The coarse weavings of this tribe have received recognition for their unique art form by the government of India that actively awards mastercrafstmen annually. As a result they are becoming known commercially. These five tradition based textile forms that I have described above are outside the range of textiles woven for commercial purposes. Rather, these are textile forms created for the internal consumption of tribal families and are quite likely just a small sample of their specialty weavings.

Whether tradition was built on these weavings or vice-versa, is something we will never know. But hopefully increased interactions with this tribal group over time, will enhance our understanding of their un-spoilt unadulterated textile traditions.

Another Asian tribe group, in which similar textile traditions take centre-stage in life traditions are the hill-tribes of Northern Thailand – they even have richly embroidered burial costumes designed only for burial. But that is the subject of totally different thread …..

Jaina Mishra is based in Singapore and Goa. Her fascination with the world of antiques and ethnic textile crafts that began as a hobby over two decades ago, has now grown into a serious pursuit of insight into these worlds. This pursuit has resulted in real life interactions with endangered cultures, and in a collection of antique and ethnic articles. Her collection is available online at www.wovensouls.com