Like the proverbial prayer flags, flapping in a high Himalayan breeze, the direction of the Tibetan rug market remains with out a real direction or purpose. After all these years (12 to be exact since the appearance of HALI 49, Tibetan Rugs – A Tribal Tradition), some progress has been made in regards to what the general public feels is “good” but myth, fantasy and misunderstandings are still promoted in the back room discussions, publications, and dealer fairs.

‘Tibetan Rugs – A Tribal Tradition’ was met with derision and incredulity by the traditional Tibetophile crowd at the time of its publication. The market and collector focus had revolved around pictorial designs, and those with Buddhist elements. Geometrics and simple patterns were scorned in spite of Philip Denwood’s 1974 publication which casually mentioned that these were in fact the oldest rugs extant from the plateau region.

Now the market and collectors generally understand what is old but that has little to do with changing the perspective of collectors’ focus. Inevitably, later rugs are still common in most collections. While “good” rugs are few and far between in the narrow context of Tibetan rugs, as they are among other types (notably Baluch), the dealers’ fairs (ie. Caskey/Lees, HALI, etc) rarely provide a venue for seeing truly old and beautiful Tibetan rugs. Too often, it is the ubiquitous checkerboard rug that can be seen, in addition to a variety of odd tsuktruk weavings (usually single coloured pile weavings consisting of narrow strips sewn together, originally woven on a small back strap loom. Rarely do these rug occur with designs). Curiously the tsuktruk weavings had not really appeared in the marketpace of the late 1980’s/early 90’s.

The so-called “Wangden” rugs are really at the very core of the gap in scholarship in the Tibetan rug field. Wangden is a village in Tsang province of Tibet, purportedly a traditional weaving center from which ALL these rugs once referred to as warp faced back weavings emerged. Curiously, the variation in palette and structural materials along with weave pattern have not been accounted for and all these weavings of this type are known by this name. Such attributions recall the ubiquitous “Bokhara” name assigned to all Tekke Turkmen rugs with rows of gols and a certain look or feel. While Wangden may be a source for some of these rugs and is certainly a weaving center today, an industry fostered by foreign investment and entrepreneurial skills, the idea that rugs with very different palettes (ie.dyes, dyes are determined by provenance), there is really little to no chance that the varying types of “wangden” rugs originate from this one spot on the map. Note in the following group of photos, the very different appearance of three pieces when viewed from the back. One has brown warps, the second has real goat hair warps and the third has ivory woolen warps. All three typify distinct types of from this larger group of warp faced back rugs. The fundamental misunderstanding of the significance of these variations is at the very core of the confusion concerning the entire field of Tibetan rugs by those intimately involved with procuring and promoting them to an eager client base. 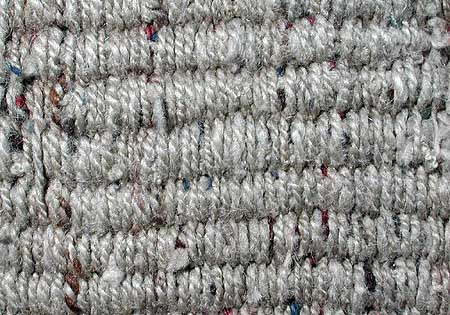 The tiger rug phenomenon is also crucial to understanding the trends in the Tibetan rug market. Fad and fashion are common in ALL areas of rug collecting. These fashions in Tibetan rug collecting are not necessarily predicated on rarity of the object but the possible use and/or role it played in Buddhist dharma practice. Tiger rugs fulfill many of the expectations of the average Tibetan rug aficionado. Labeled as meditation rugs or lama rugs has done much to contribute to their desirability. While some are most certainly designed for monastic use (see figureŠ), many of the older ones with a simple brown ground colour with brown, black or dark blue stripes may very well have been used by members of the secular population.

Every square mat in Tibet is a meditation mat. Or so we would be led to believe by how these rugs are labeled the literature. I used to say, tongue in cheek, that if every square mat extant was designed for meditation, everyone in Tibet would be meditating and no one would be doing anything else but committing themselves to the dharma. Obviously this is not so.

I have always found it curious that the checkerboard rugs are some of the most popular type to come out of Tibet. Obviously an understanding of iconography or design pool is not necessary to appreciating these rugs. I also understand their appeal in a decorative market, for decorators hired by clients to furnish an apartment or house. But how these rugs came to be considered collectible in the true sense of the word is beyond me, especially when the vast majority of them exhibit an extremely limited palette (ie. blue/tan squares of colour) or synthetic dyes and are of limited visual appeal. This example is one of the more colourful ones, with the uncharacteristic use of three colours, red, green, and white.

Even the Baluch market, with a relatively underdeveloped aesthetic, is unforgiving when it comes to synthetic dyes. And the Turkmen marketŠ.no need to really explore that further as it is the most strident market when it comes to purity of design, colour and age.

The client base has yet to question the theories which have been casually espoused, a curious phenomenon as those with interest in other types of rugs are quick to discuss, question, and refute similar theories on Turkmen (ie. the Imreli controversy proposed by the leading expert in the field) or Baluch (ie. the Hazara/Karai proposals).
Why? Certainly this is not a less discriminating or intellectually challenged group of people. On the contrary, I know there are many successful businessmen, doctors, and other professionals who are intimately involved with Tibetan rugs. I believe it is an unswerving belief in the dharma, in Tibetan Buddhism, that accounts for the initial interest in Tibetan rugs. This faith has been transferred to everything else surrounding the Tibetan culture. The very origin of Tibet, the roots in ancient Bon-po and the original Zhang Zhung culture of Tibet is seldom discussed or seldom acknowledged. Tibet, as seen in a wider pan Central Asian context, is unknown. It is Shangri-la, an isolated paradise of Buddhist thought with a truly fantastic version of Buddhism that inexorably appeals to all of our imaginations. Migrations into the geographic region of Tibet as we know it is never touched upon in books on Tibetan art or rugs. Few know of the strong relationship between Tibet and the peoples of the Pamir Mtns in northern Pakistan (from where Padma Sambhava, a legendary figure in Tibetan Buddhist history, originally came). Curiously, even the founder of the pre-Buddhist Zhang Zhung culture supposedly came from either this region or further west in modern day Persia.

But I digress as this is not a discussion of the ancient history of Tibet, but rather the state of the Tibetan rug market and associated scholarship. The dearth of truly old Tibetan rugs is actually at the crux of the matter. As is usual, the flood of old rugs coming out of Tibet lasted a few years and then slowed to an alarming trickle. When they first came out, they were sold at very affordable prices but the growing demand escalated the cost at the source to such a degree, much of the fun, the feeling of adventure and discovery left and enthusiasm waned in the general rug market. Those with an interest in all types of Central Asian rugs balked at the stratospheric price levels and only those committed to Tibetan rugs remained, participating in and creating the market and resulting scholarship base, contributing to the isolated and focused perspective which constrained the evolution of a market and associated scholarship. Most of those who deal exclusively in Tibetan rugs have no foundation of knowledge and experience with Central Asian tribal rugs, nor do the clientele who are steeped in Buddhist philosophy and dharma practice. Clearly these factors account for the narrow focus.

Where is the market today? Most runners to Tibet go to Beijing to look for rugs and to other locales in China. Tibet itself has been mined and the availability of good, old Tibetan rugs is very, very limited. The adventure, the excitement of going to Lhasa to look for rugs is over. My own personal excitement about Tibetan rugs remains unabated; when I see a good one, I recognize it immediately and comment to the owner. But clearly the time is past when great Tibetan rugs will come onto the market, fresh from the plateau region itself.