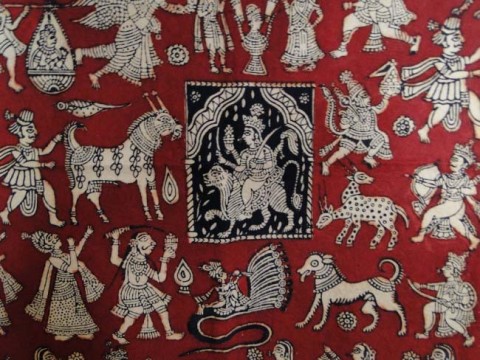 When pushed to a corner, people find a new way out. These new ways are often bitter, sometimes disruptive and only in a few instances do we see them giving rise to beauty and art.

The Devipujak community lives in Gujarat India and like many other ethnic groups from that region, they have unique beliefs about their origin, their diet and religion. For a few centuries, this difference led to restrictive social practices. As recently as 140 years ago an act was passed by the British regime that institutionalised their persecution.

Ethnographic studies point to the fact that for a long time in history, the Devipujak community was disallowed entry into temples. To overcome this abhorable restrictive practice, the community found a unique solution.

They painted an image of the Goddess on a piece of cloth, hung it up behind the temple and directed their worship at the painting of the Goddess. This practice took root and the painted textile came to be known as “Mata Ni Pachedi” literally meaning ‘Behind the Goddess (temple)’

The persecution of this community was detestable, yet it resulted in the birth of a new textile art. A lotus is born in the murky waters of social discrimination!

Contemporary India has no place for such divisive concepts and so this selective restriction has been abolished. But the tradition of worshipping the Mata ni Pachedi continues eve today.

At the time of worship, groups of Devipujak worshipers assemble together, hang up the textile painted with images of the Goddess and conduct the worship rituals consisting of group singing of bhajans, aarti and other puja rituals. One or more Mata-ni-Pachedis are hung up and all the rituals are performed using the Pachedi, the portable shrine as the focus of attention.

At the centre of each Pachedi is a picture of the main Goddess and surrounding the central image are the legends of her life. 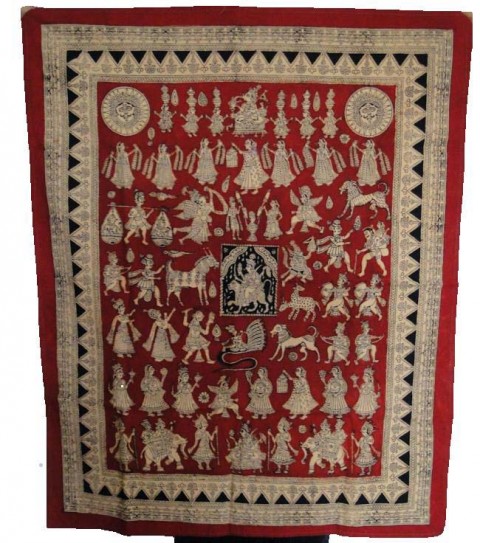 There are 999 avatars of the Goddess and so there were 999 variants of the Mata Ni Pachedi, each narrating narrating a different tale!

In the social system of beliefs all over India it is common to ‘take a vow’ that is associated with the asking of a specific boon or wish. For instance, a young student may take a vow that if she gets admission into medical college, she will perform certain rites or abstain from certain foods for a year or embrace a particular new habit. A man may vow that if he gets a son, he will give up smoking etc. To mark the granting of that boon, there is a worship ritual or puja. In the case of the Devipujak community this puja takes the form of animal sacrifice before the Goddess along with an offering of a new Pachedi to the Goddess.

EVOLUTION OF THE ART

The Devipujak community has been practicing this worship and this art for 300-400 years in the Western state of Gujarat, India.

In the beginning, individuals used a wooden stick to draw out their own Pachedi and offered these for worship. As the art evolved, clay blocks were created for ease of replication and were used to apply mineral dyes to the cloth. These were coarse and the print became diffuse over subsequent uses. So after a short productive life span these clay blocks were laid to rest in the river. These were eventually replaced by wood blocks that not only lasted longer but also allowed for sharper drawings. Wood blocks are used even today to make Mata-ni-Pachedis. The production of hand drawn Pachedis continues side by side but is more labor intensive making the hand drawn Pachedis are more expensive than block printed ones. Economics therefore forced a shift and today only a minority of the Mata-ni-Pachedis created are hand drawn.

Further another significant change is seen between older Pachedis and new Pachedis. In the olden days Pachedis were meant for group worship and the Pachedi once hung up would be viewed by a large group of people. The proportions therefore, of both, the textile itself as well as the motifs drawn upon it, were large and the Pachedis could be upto 3 metres in length.

Image above and below: A classic example of an older Pachedi from the collection A. A. Wazirbhai, Bhuj, India. 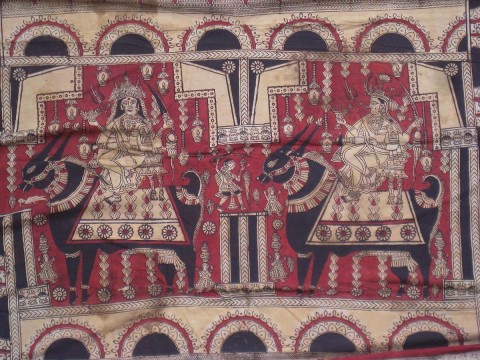 The condemnable divisive practice that resulted in the birth of this art, has no place in contemporary India. In the last century measures have been put in place to undo the social crimes committed against this community. Along with the fair and just administration of equality, the entry restrictions to temples have been lifted and today the Mata-ni-Pachedi is not the only shrine available for worship.

Sanjaybhai Chitara, one of the few remaining artists that continue to practice their ancestral art, says that there is a shift in the primary usage of the work he produces: “These days these venerated textiles are sold mainly as a works of art rather than as worship cloths. In the future these are likely to be seen only in museums”. 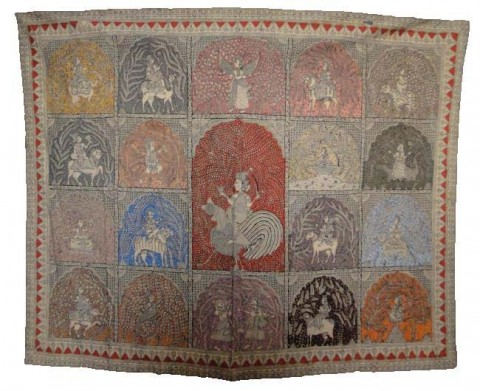 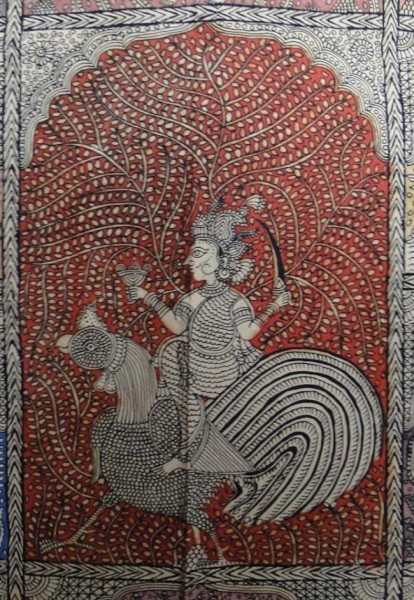 An art that was once a form of folk art and practiced by the laity has, over the centuries changed status and now belongs to the category of art that is created only by skilled artists. Mata-ni-Pachedis today are made only by three surviving families of artists with the productive generation continuing their ancestral art.
Whether the next generation will find this profession economically feasible to continue with it for the sake of art, remains to be seen.