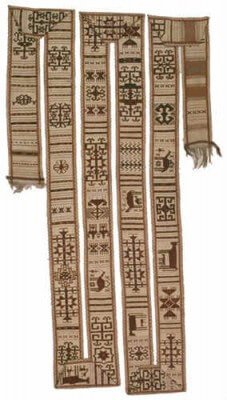 The opening sentences to the brochure for this marvelous exhibit reads “The trellis tent is a brilliant invention. In its present form, it has made nomadic life possible across Central Asia for at least one and a half millennia”. The trellis tent, or yurta, its most common name among the Turkic peoples across Central Asia who inhabit it, does not actually appear in the galleries at the Textile Museum ( 2320 S Street, NW, Washington, DC ) although a charming table-top Kirghiz yurta accompanied by miniature Kirghiz and their herd animals is in the exhibit. A short Video from the Mingei Museum in San Diego shows the entire process of construction, demonstrated by a group of Kirghiz tribes people whose yurta’s components are spectacular; its tent bands and appliqued felts, its reed screens and its tasseled ties.

The people who occupy the trellis tents are pastoral people, nomadic and semi-nomadic, Turkmen, Karakalpak, Kyrgyz, Kazakh and Uzbek; they weave carpets, saddle and tent bags as well as the tent bands that provide the material for this stunning exhibit. Richard Isaacson, the Curator, drew on the Textile Museum’s own holdings for about 1/3 of the bands; the remainder come from private collections in the US and Europe. He conducted three tours on opening day. First he showed a few pile weavings -bag faces from a variety of Turkmen tribes, and discussed the difficulty of relating the bags and carpets of specific tribes to specific tent bands. In that long gallery a half dozen or more horizontally mounted tent bands were labelled; materials, size and origin provided –.but Isaacson carefully added a question mark after every attribution. indicating the difficulties of attribution even after a great amount of study and comparison.

Where on the yurta the tent bands’ functions are both as critical elements bracing the walls against collapse AND as decorative objects in the culture of their peoples, here they function as a dramatic visual treat and provide an intense indroduction into their ethnic, aesthetic and technical aspects. Tent bands from Central Asia are woven in several different structures. Isaacson has divided them into three groups; flatwoven, pile and mixed technique. While he discussed the technique of the pile weavings, particularly the highly prized pile designs on plain weave grounds, he discussed the flatweaves in terms of their intricate design elements. There he discoursed on their repeats and variations as in a musical composition. This provided him and the listeners with the ability to look at the at-first confusing changes and repeats in terms of the symmetry and placement; all of which made the experience pleasantly intense. On the website here (vanishingtextiles.com) look at #733 Turkmen ghujeri tent rug (in Medium Rugs). Try counting the design motifs and the repeats of their juxtapositions – for a brain buster.

A special group of tent bands, ceremonial in nature, and kept carefully to be passed on by the generation, are records of the wedding ceremony (see detail of one above).

One gallery called “Transformations” showed ways in which sections of tent bands were reassembled into other useful textiles; rugs or covers or hangings in the conservative manner of peoples who do not throw away the usable portions of anything that is part of their spare existence. Creative patchwork has always cast its spell on me, for one. Look at our ghujeri #2010 in Large Rugs. It is Uzbeki and has ten bands of which 4 are different treatments of diamond designs, 3 have different shaped, different sized extended hook motifs and the others are unrelated. These unschooled women weavers are certainly up on their geometry. Our Ersari Turkmen tent rug #1078, also in Large Rugs, contains solid bands of colors with jagged edges alternating with plain weave white bands which heighten the drama. Tent bands are approximately 40′ in length, the size of the trellis tent’s circumference where they are placed facing the interior, under the felt outer covering. The horizontal loom, staked to the ground extends from the interior where the weaver sits, out beyond the tent as is necessary. I do not remember as I write this if the bands for the ghujeri are chosen from a stock of band material made for that purpose of if they are pieces unused in a planned tent band. If you are interested, stay tuned.

Congratulations to the Textile Museum and to Richard Isaacson for a brilliant job. A catalogue is planned; I hear there will be fold-outs to show the horizontality of the tent bands.