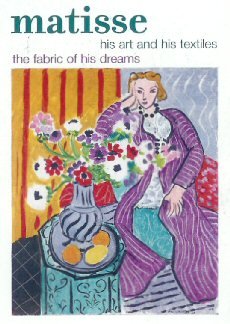 In Milan, at the 1999 ICOC a large exhibit showed paintings of the Renaissance and surrounding centuries, each accompanied by analysis of the Oriental Rugs in the paintings.

In 400 years from now, if there are paintings from the 20th century to look at, what will be said about the textiles in Matisse’s paintings? If records of the exhibit, Matisse, The Fabric of Dreams: His Art and His Textiles; and its Catalogue still extant, it will reveal that the textiles so omnipresent in the paintings are not there simply as rich embellishment but are the font, the reservoir from which is drawn Henri Matisse’s art.

The Exhibit shows groups of textiles, hanging, close to the related paintings. They are all labeled from “private collection”; they are textiles that belonged to Matisse himself, recollected from many sources by the curators. It is easy to identify the textiles in the paintings, loose but unquestionably replicates. Many appear in their entirety. The textile designs are not used to become something else (it is prevalent these years for fashion and home designers to use kilim and oriental rug motifs as patterns in their shirting and upholstery fabric) . A purple and white caftan (identified as Ottoman, 19th c) worn by the seated woman in ‘Purple Robe and Anemones’, painted in 1937 is proudly itself. A velvet jacket appliquéd with gold trim (‘Ottoman or Moroccan’) is found in one of the gorgeous Odelisque paintings (the “seated Odelisque from the Cone Collection at the Baltimore Museum).

Matisse was born into the life of textiles. Born to a weavers’ family in northeastern France, he grew up in Bohain-en-Vermandois, a center of textile production highly regarded for its luxury silks and taffetas. Generations of Matisses had earned their living at the loom. “He grew up on a block surrounded by weavers; embroiders’ and designers’ workshops, and among people preoccupied with finding fresh ways of combining and exploring colors.” Contemporary accounts agreed in the supremacy of “the Bohain weavers’, delicacy and richness of their colors, their unerring sense of design and their insatiable appetite for experiment” Fine French furnishing fabrics are in Matisse’s collection and in the paintings.

It is interesting to know from a chapter in the book/catalogue written by Hilary Spurling,the chief curator of the exhibition, that Matisse’s art education was in great contrast to the open-mindedness found in textile production. At the Academy drawing was taught like a dead language, use of color forbidden. In the weavers’ workshops on the contrary individuality was highly prized. I suggest that Matisse’s visual sophistication was both genetic and environmental.

There are fine French furnishing fabrics in Matisse’s collection and they appear in some of the paintings. Among the textiles in the largest display in the first gallery are a 1760 Toile de Jouy printed cotton, a 19th c otton ikat identified as possibly French provencal, a Javanese Batik, a Moroccan silk sash and an embroidered silk. But I feel that his major textile loves were North African, African (Congo Kuba cloths) and Polynesian.

Very dramatic in the galleries were a pair of Moroccan transparent lattice screens with prayer rug mihrab designs. They were made of colored cottons appliquéd to heavy cotton and pierced to resemble fretwork screens common throughout the Islamic world. When shown in front of light they make shadows and intricate surfaces used in several of the paintings. Islamic design , calligraphy and arabesques appear throughout.

Kuba raffias, woven by men in the Republic of the Congo from the raffia palm leaf and embroidered by women with dyed raffia, were signs of wealth and standing (smaller pieces were used as units of currency) Kuba raffias adorned the walls of Matisse’s his Villa where he moved in World War two. He had purchased them, known as African velvets, when they were in vogue in Paris in the 1920s. Their designs appear in many paintings. In his studio Matisse juxtaposed the Kuba clothes with bark cloth brought back from his 1930s trip to the South Seas. Two large pieces of this work are in one of the galleries. (the cloth known as Tapa was the bark of breadfruit or mulberry trees, soaked and pounded and covered with strips of raised designs.) Matisse said he could look at them for hours pondering the mysteries of their instinctive geometry.

A remarkable result of that Polynesian trip was perhaps the triumph of Matisse’s last art, the magnificent paper cutouts. The cutouts feature free form sea anemones, fish and other water creatures, waves, leaves that float on vivid blocs of brilliant colors and became the most direct way Matisse developed to express himself. Two huge tan and white silk screened works (Algae 1947) filled a wall of the final room in the exhibition shared with the ecclesiastic copes Matisse designed for the famous Chapel of the Rosary in Vence in southern France. His copes with their minimalism of motifs and startling color contrasts remind me of the early Byzantine vestments I saw at the Hermitage in St. Petersberg.

As for actual carpets, I found that an Algerian rug, most probably a kilim, figured in several paintings. It had a wide red border with minimized garland motif and a black field with just suggestions of flower heads. I found one (1924) in “Interiors Flowers and Parakeets”. Anothr appears in “Dishes and Fruit on a Red & Black Rug”. This was bought by Schulkin, the Russian textile magnet, in 1906 and is now in the Hermitage Museum.

Schulkin was one of the largest Matisse collectors. It is nice to think of Matisse and Schulkin discussing rugs and paintings and their interconnections. Another of painting bought by Schulkin now in the Hermitage, the 1923 “The Painter’s Family”, contains a carpet that was poddibly a Heriz.

Another rug in a painting from the Philadelphia Museum was a dark colored runner partly covering a large orange carpet whose origin I was unable to place.

Another rug, in “Piano and Checker Players” (1924), most likely a Balkan kilim, probably also a Schulkin possession.

Early critics talked about Matisse’s revolutionary art “He confused two senses; the art of the painter and the art of the tapestry-maker” (1910-Jean Francois Scherb) ”Matisse’s painting in a gallery furnish the walls in sumptuous fashion and match the tonalities of the handsomest carpets”(Michael Puy).

Apparently the great appreciation of carpets came to Matisse after a famous Munich exhibit which he visited in October of 1910 – at the end of his life he said of those masterpieces of ‘Mohammedan art’ “revelation thus came to me from the Orient”.

Matisse also said, toward the end of his life, that in the Odelisque paintings (studies of scantily and exotically dressed women) the textiles were as important as the models. He layered the textiles to create a tension and then softened them to convey “the impression of happy colors – a balance of deliberately massed riches”.

“Matisse’s lifelong love of colored cloth came wide awake once he realized its potency for modern painting, a discovery that proved as fecund, in its way, as Picasso’s of African sculpture….Matisse played the ambiguity between pattern and a picture of a pattern, setting up resonances of color so strong that you seem to hear, feel, taste and small them” (Peter Schjeldahl, New Yorker).

The textiles shown in the exhibit are nice, even fine, examples in their categories. They are not knock-out pieces. There are no carpets; great carpets can be seen right there in the Met in the Islamic galleries. This exhibit of the art of Henri Matisse demonstrates the relationship of inspiration and creativity. The inspiration Matisse derived from the patterns, designs, and cultures of diverse peoples empowered him to create these great works.

Matisse, The Fabric of Dreams His Art and His Textiles Book is available in hardcover or paperback at the Museum or discounted at Amazon.com although at Amazon it is back ordered and I have not yet received mine.