Now being a district of Esfahan, Kashan was a part of Jebal state in old times. The mountain chain goes from Northwest to Southeast and the longest peak around is Karkas, 3800 meters high. The city is 235 Km south of the capital Tehran, and 250 Km North of Esfahan. 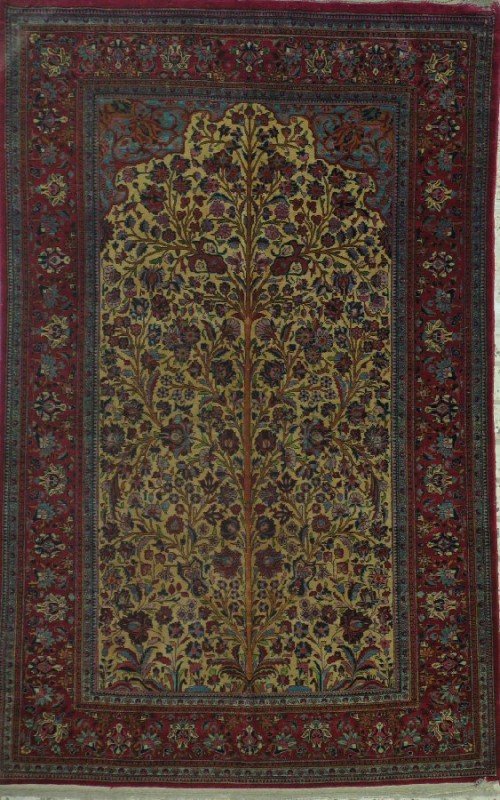 During the rainy periods of the last ice age, there was a wide sea in center of Iran. This sea began to dry afterwards and now the central kevir is what is left from that sea. Mankind began to settle in villages around this sea and now we find the oldest civilizations of the world around it. One of these civilizations belonging to 7000 years ago was The Silk Civilization, which the remains are 2km southwest of Kashan. The Silk people were very genius and developed for that time. Items found on the north and south hills of the Silk are a honour for the greatest museums of the world. Silk was the first settlement in plates and thus, of extreme interest for archaeologists. They were great potters and painters and used bricks for their buildings.

There are strong proofs that the Silk was still alive, though weakened by several attacks of Barbarians, and people lived around during Akhemenid and Sassanian Empires.

After attack of Arabs (1500 years ago) which brought Islam, They became Shiies. The historians of that era, name Kashan with two things, it’s shiie people, and it’s too many scorpions; the city was called small at that time.

Most of the old buildings are demolished by several earthquakes, but the ones remaining show the glory of the city 400 years after Islam. The Saljuqhis kings paid great attention to the city and there were several universities, seminaries and hospitals around.

The city was half destroyed by the Moguls and many were killed, but then soon became to good condition after wards due to it’s weaving and pottery industry. More great buildings were built after the Mogul kings accepted Islam and became shiies.

With the rise of Saffawid dynasty, the Shiie people of Kashan welcomed them and many clergies from Kashan gained fame. The city was then considered the religious capital of Persia.  Bazaar of Kashan was improved and the Great King Abbas made a new four-way market in the center of bazaar. Many old buildings were renewed and many new buildings were made. Fin garden is a masterpiece left from that time.

The city was twice attacked by Afghans at the end of Saffawids, but only the villages were captured.

The life was calm during the Qhajar period. The city being destroyed by a huge quake, still was pioneer in weaving and other industries. Many great buildings were made during this period.  The city is now famous for one more thing: Golab (Per= Essence of rose). The world’s best roses grow in Kashan and quite many people are making this product every year.

Kashan Rug weaving industry has had two major historical periods; first, in 16th and 17th century, and second in late 19th and 20th century. It is obvious that the art and industry of rug weaving in any area has been a primary job done by villagers and tribes but in Kashan, it’s vice versa. The Kashan people had a great tradition and method of weaving very fine silk and Makhmal fabrics before they started weaving rugs; therefore the first rugs woven in Kashan were even better than many other regions.

The first period known as the golden age, was along with the glorious times of the first saffawid kings and specially King Abbas. He paid a great deal of attention to the industries of Kashan and specially Kashan Rugs. Many gold and silver twisted rugs were woven at this time.

The design seen on Kashan Rugs were very similar to Esfahan but with more dense patterns. They used birds inside medallions and triangles. Small flowers and blossoms and special medallion and triangle patterns containing nice and special Shah Abbasi flowers were the significance of Kashan Rugs. Some designers of Kashan belive that the medallion and triangle pattern was first used in Kashan and then went to other weaving places. One of the unique patterns belonging to Kashan is the Muhtasham design. Qhotbi, brick, broken antler, tree and hunting ground, are other patterns used in Kashan.

Dyes and dying method of Kashan was and still is one of the best. They used live colours with high contrast in old times, but now because of the taste of the market, they use milder colours. However it is said that Laki (Dark Red) background was first used in Kashan.

Most of the looms are now in people’s houses and the women do the weaving while they’re in the house and taking care of everything.