Isfahan ( Esfahan ) was called Key during Akhamenid era and Fereydun Shahr was a fertile and glorious land called Partica in those times.

Isfahan has always been an important city of Persia; being the capital of the country for several times or at least the center of province or Satrap.
The hard effort that the Great King Abbas (of Safavid Dynasty) put in reconstructing the city, brought world wide fame and glory to the city. The title ‘Half of the World’, given to the city, was some how an under estimate of the city with all its beauty and supremacy compared to other major cities of that era.

The Safavid Kings, being art lovers, wanted to have the best of everything. This made a great opportunity for masters of all arts, and the remaining art pieces of that era, like ‘Naqhshe Jahan’ square are still attracting the hearts and eyes of art lovers from all around the world. The greatest square of the world with dimensions of 150 in 512 meters, is the peak of arts and crafts of the old world. Great architecture of Ali Qhapu, Shah mosque, and Sheykh Lotfollah Mosque with all its tile-works makes one admire the whole beauty. It’s such a great feeling to stand under the dome of Sheykh Lotfollah Mosque and realize that this is the same design woven onto great Rugs of Isfahan.
Master weaving workshops of the royal house was located between Shah aquare and the Chehel Sotun Building. They used best quality material and worked under direct supervision of Great King Abbas. Master pieces left from that time are now an honor for the most famous museums of the world. The attention of the Great king and his decedents gave a rebirth to the 2000 years old art of Rug weaving of Persia.
Isfahan Province, now with over 15 districts and many counties, is still a very important part of Iran and a major tourism and industrial center. The city being located as the center of a province which houses from Bakhtiar nomads to Nain Artists, is considered as a major weaving pole of Iran. In the beautiful and very old Bazaar of the city, one can find best of different styles of Persian Rugs, from Bakhtiar Yalameh to Isfahan Kork and Nain. Also beautiful Bakhtiar kilims and fine silk and kork Qhaliches woven by Christian minorities have their own niche.

Isfahan rugs i.e. the kork and silk rugs now woven, is one of the finest Iranian rugs. The motifs and patterns of this style are traditional and have roots in ancient, pre-Islamic motifs of old Persia.
Moving the capital city of Safavids from Tabriz to Qhazwin, brought a lot of artists to the city as well. This was the start of founding a new school of arts later referred to as Isfahan. The special sign of this style is the use of ordered and spinning Islimies. They have several types and the famous ones are Yari and Dahan Ajdari. Along with them, usually pomegranate flowers -later called Shah Abbasi flowers were used.
The main feature of the tradition style was the imbalanced —– design and the fine details. Also the common colors used were deep rust, blue, indigo, crème, and dirty yellow.
After some hundred years, during the era of Qhajar Dynasty, new motifs under influence of European paintings entered the designs. The new designs called Gol Farang or Naqhsh e Qhajar became famous and favored among the weavers. The common colors of this period were red, pink and yellow.
The most common traditional designs are Medallion and triangle, mixed with different flowers and Islimies. Famous Isfahan designs are Medallion and triangle, Islimie, all over, hunting, dome, Chogan, Vase, Tree, and Flower and Bird.

Famous designers of Isfahan
Master Ahmad Archang: He never was a student of a well known master. Just wandering in beautiful sights of Isfahan moved his soul in such a way that he devoted his life to designing. Khotai and Islimie along with Dahan Ajdari flowers that he designed, came to live on the rugs of Isfahan for ever. He died in 1990. 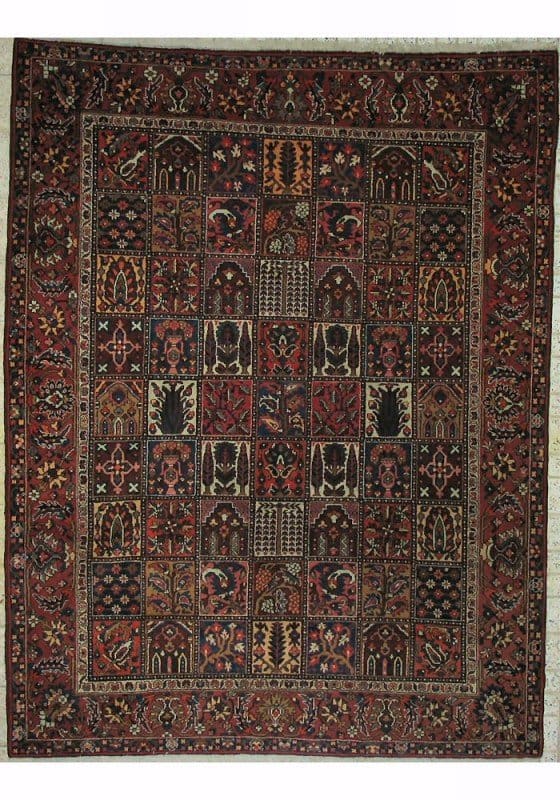 Master Rashtian: He was born in 1929 in an artist family of Isfahan. He was a great miniaturist and designer and trained many students who became masters later.
Master Reza Shakeri: he was born in 1916 and is known as the master of coloring and dotting of Isfahan.
Master Karbasian: he was born in 1926 in Isfahan and was a student of Master Ahmad Archang. He became a master himself and designed a wide range of Islimies and Khotais.
He always said that my and all the other designers teachr, has always been the great Naqhshe Jahan square.
Master Isa Bahadori: he was born in 1908 in Arak. He educated from Kamal ol Molk school and got his B.A. in Arts. His creativity in different arts was up to level of genius. He received the gold medal of Brussels Exhibition and No. 1 sign of Arts of France.

Colors used in Isfahan
The colors of Isfahan rugs are a special feature as well. Generally 12 colors are used and cold colors are more frequent. Crème, deep blue, blue and earth colors are common.
Designers take the border and background colors into account. For instance, in a warm back ground they use dark borders. They also use the border color for the flowers as well. This kind of coloring makes the Isfahan rugs distinguishable.
The looms used in Isfahan are of the vertical kind. Weavers use Persian knots and double wefts.
The weavers usually do the colorfull motifs and flowers and then fill the rest with the background color.