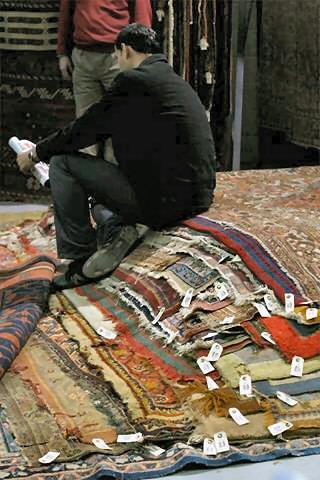 This is a report, mixed with some private musings, on the Carpets, Rugs & Textiles auction that took place at Netherhampton Salerooms, Salisbury, England, on 8 March 2007. The twenty photographs included were taken in the order in which they are inserted in the text. I had been at Netherhampton Salerooms once before; at that time, I came to collect some rugs that I had won after bidding by fax. I would find myself logging around an unwieldy roll on my shoulder for the rest of the day. I had been given a lift back to Salisbury centre by a senior auctioneer who could hardly believe that anyone might choose to walk to the place, which is perhaps a mile outside of Salisbury.The walk from the rail station is actually very pleasant but for the last part. Heading south-westwards onto the town path through the idyllic water meadows formed between the meandering rivers Avon and Nadder, you completely bypass Salisbury centre. Looking back over marshes, ditches and grazing cattle your are offered vistas of the famous Salisbury cathedral, once a subject of Constable’s landscape paintings. The last half mile or so you have to walk on the hard shoulder of the A3094. I remember the high grass on the roadside swaying sidewards violently with each passing truck, a strangely unsettling experience as my body tried to compensate for the sudden offset. This time, arriving by train early on the day of auction, I took a cab to to get a chance to go through those rugs that I had marked in the printed catalogue before the auction would begin. The large nondescript building which houses Netherhampton Salerooms is clearly engineered for cattle auctions, rugs and furniture being a small sideline. In the entrance hall you find self-composed billboards showing images of top furniture, ceramics or rug sales amid posters on cattle vaccination or BSE.In a small office that has a window onto the large auction hall, I found June Barrett and Ian Bennett busy answering last-minute questions about the rugs to be auctioned. The American collectors seem particularly fastidious to the point of disregard. “They call you just an hour before the auction and want a condition report on a long list of rugs”, said Ian Bennett, who runs the Carpet department together with June Barrett.  Both joined Netherhampton Salerooms when Wooley & Wallis, just across on the other side of Salisbury, decided to discontinue specialist carpet sales in 2004. I went into the auction hall which was filled by the roar of a gas heater. A few dealers and collectors were walking around inspecting some of the rugs they had earmarked – and so did I. Then it was announced that the carpet stack would be turned the last time before the auction would begin. I was too busy taking photos to pay much attention to the carpets and runners – but I had made up my mind anyway that I would just bid on a few rugs and bags. Since I don’t have the resources to collect the things I really like, I have something of a transient collection – meaning that I usually buy some of the pieces that interest me in order to analyse and describe them, photograph them, put them on my website, and sell them on Ebay later on.

In this process, I have made a few losses and a few gains, but in all, it does not make any sense commercially. Even when I sometimes sell a piece at a good nominal profit, there are too many actors that also want their share – the auction house gets a buyer’s premium (Netherhampton asking 15% is at the lower end compared to other auction houses); the premium has VAT on it; the credit card payment incurs another charge (or you risk taking out too much UK cash from ATMs); shipping costs must be added (which is comparatively lower for the lighter and higher-value items shipped as a bale, a banal insight which pointed me towards bags and bag faces as items on which I might stand a better chance of making no loss); then, there are the Ebay listing charges, which are higher for higher starting prices and reserve price auctions that guard against last-minute sniper-type purchases of items that may have an appeal to only a limited clientèle; and there is the Ebay fee on any successful sale (around 5%). Add the cost of Paypal for American or UK buyers (ca. 3%) and the unfavourable currency conversion from US $ to Euro offered by Paypal, and you begin to understand why selling a rug without making a loss is not easy.

Next to the window from left to right, you can see lot 1046, a Lori or Kurdish Kilim that was estimated at 150-200 and sold for 130; lot 981 Daghestan rug, maybe woven by a child, for which I bid up to 300 (it went for 320); and some Turkmen engsi that must have been added after the catalogue went into print since I cannot find it in there. While I felt a vague excitement as I watched the staff set up the microphone at the pedestal (I took this as a sign that the auction would soon begin), the other attendants seemed rather calm, nearly lethargic.

Then, finally, the auction started with the “General rugs”. In figure 6, you can see lot 527 “Two matching Chinese rugs, Tianjin about 1930-40″, estimated at GBP 100-150. With some of these I wondered whether it would make more commercial sense to get them cheaply and resell them on Ebay, but I was unable to gauge what such rugs would fetch, so it seemed risky.

A small Donegal Arts & Cafts carpet rose above most others. Estimated at 300 to 500, it closed at 1000. Other Donegal rugs would later perform equally well – but what does that mean? What actually is this performance? This way of talking imbues the rug with a sort of life, as if it had to stand up and prove its worth. In reality, it hangs sullenly off its rack, as if it knew that chance and the whim of the current market dictate whether it will do well or fail. There is really nothing wrong with rugs that don’t ‘perform’, such as lot 531 Silk Kashan that sold at 1800, far below its estimate of 2.800-3.200. Still, browsing through the rugs suspended from the racks, I could not help but feel some ghostly personal presence, or rather absence, emanating from each one as I decided to face it properly. In those brief moments the rug wants to communicate its unknown history and at the same time seems to despair quietly at not being able to do so. Its presence seems utterly disinterested in the process of appreciation that is temporarily sealed by a stroke of the hammer and and the registration of the closing price against the bidder’s number. Maybe this air of despair is just created by the neglect and maltreatment that it may have suffered over the years, or by the fact that it is now torn for good from its previous context of use. May be it is even permissible to talk about a more general melancholy of rugs. Once a rug has been  completed and is cut off the loom, does not a subtle despondency settle in its fabric, as if its completion was just the beginning of its slow demise through use and wear? But enough of those musings, and back to the auction process. The time given to each rug to attract a bidder is short; somehow each rug blends with the previous and next rug. Some of the poorer rugs were further humiliated by the fact that no bid came forward, at which point the auctioneer would  reduce the entry price, saying, faintly mocking as if insulted by the lack of interest, “Surely, it’s worth fifty? Twenty, then?” at which point the bidding will sluggishly commence.

For the section ‘Runners & long rugs’, the senior auctioneer Michael Vesey, a Director of Southern Counties Auctioneers, took over from Leigh Poole. I admired the way he seemed to wrap up the whole bidding process in his seasoned voice, which would just sing at a certain height to drop by a third at the winning bid. To one of his quasi liturgical phrases I owe the title of this article: “And I will sell, make no mistake”. (I remember myself musing whether I should interpret this as a warning or as an encouragement.) Soon after, a real bidding war broke loose around a pair of tattered ugly Ushak ‘Fancy Turkey’ runners which according to the catalogue and quite evidently to the eyes of all in the room were worn, faded, and stained. The estimate had the pair down at GBP 250-350 but driven by some Americans bidding over the phone line, the ugly lot sailed off into the sky unrelenting, ending at 2000.

There were a few more  ‘Fancy Turkey’ Ushaks in the carpet section, (lot no. 658, 667, 681), items in garish pink, orange and green and pitiful condition (worn, soiled, mantelpiece cuts, etc.) that I would not touch with a bargepole. They were all sold to American collectors over the phone, some for sums five times the estimate.

The carpet section of the auction started with one of the star lots, no. 651, a very long Kurdish mian farsh (middle carpet) with a colourful mina khani pattern on a wool foundation and in good condition, measuring 21ft. x 7ft.3in. (6.50m x 2.22m) – too long to fit into rooms in modern flat. Estimated at FBP 6.000-7.000, the lot went for a mere 3.700.  I wasn’t terribly interested in most of the other rugs, so I went to the empty cafeteria to have chilli with rice. What was surprising was to see how some of the other carpets seemed to be seriously undervalued. There were a few Heriz carpets and one or two Bakhtiari carpets with good dyes which went for very little. I noticed (and it is the photo that reminds me) that some of the private collectors were weathering the carpet section, perched against the table with tribal bags that they were more interested in. (Of course I cannot be sure that these were private collectors, not dealers, and there may be no easy separation into one or the other anyway.)

After the carpets came the textiles, some of which had phone bidders. I am not going to say anything about them, nice as they may be, I don’t understand them.

For the rest of the auction, as it went into the Turkish, Turkmen, Caucasian and finally Persian rugs, I was too busy watching out (and sometimes bidding) for the rugs I was interested in to pay much attention. The whole set-up was much more mobile than at the beginning where most people had been sitting; now people were walking around and browsing through the racks and the table as the auction went on.<

The first people were preparing to leave, and asked auction room staff to take down rugs that they won.

Some of the rugs I had been interested in when looking at the catalogue left me cold when seeing them directly; in others I took an interest only now. I had contemplated getting lot 896 Yuruk rug because of the iconography in the medallions, with elements that look a bit like puppets with zig-zag legs impaled on sticks, but I was put off by the synthetic red field.

The smaller items (chuvals, torbas, and other bags) were held up by Netherhampton staff. Some of them were closely inspected by dealers and collectors. Even before the auction arrived at the final lot, some people were collecting the items they had won, others talked or searched for their items. A strange slow unravelling. After the auction, I had the privilege of talking to Ian Bennett on the train back to Bristol. He had many fascinating stories to tell, many about the often sad and sometimes erratic fate of important carpets. I hope he will write a book one day to tell these stories to a wider audience.